a total of 52 video projectors to heandle !

2011 marks the 20th anniversary of the end of the USSR, which is divided into fifteen independent and sovereign states. One of them is Turkmenistan.

The anniversary of Turkmenistan's independence, on October 26, coincides with the biggest national holiday and, for 20 years, the ceremonies must be majestic!

A big multimedia show, of an international scale, is realized.

I participate in this project as a projectionist, thus defining the most appropriate projection system, taking into consideration the venue, the importance of the event and the budget available.

I bridge my client, ETC, video projection provider and its OnlyView control system, and graphic designers who work on a projection raster image, in azimuthal view in this case.

On the right you can see a statue (24 meters high) that is part of the screen.

Below the 4 Christies 20k dedicated to the mapping on the statue. 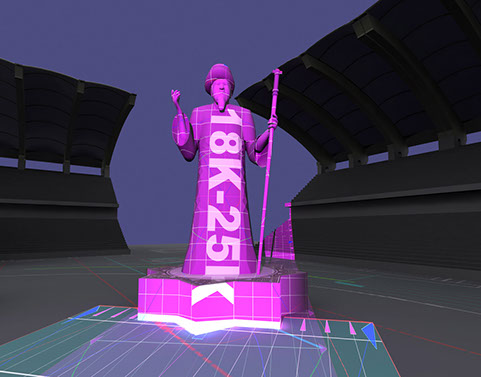 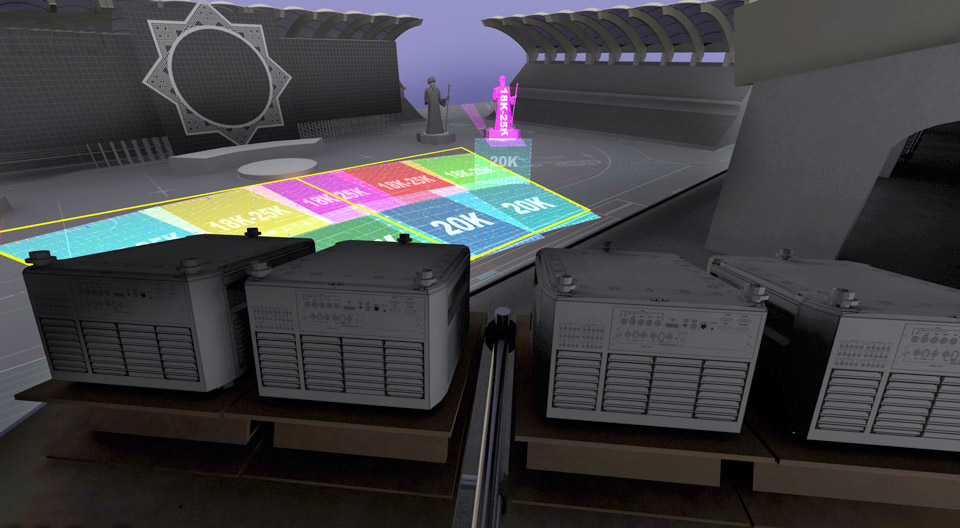 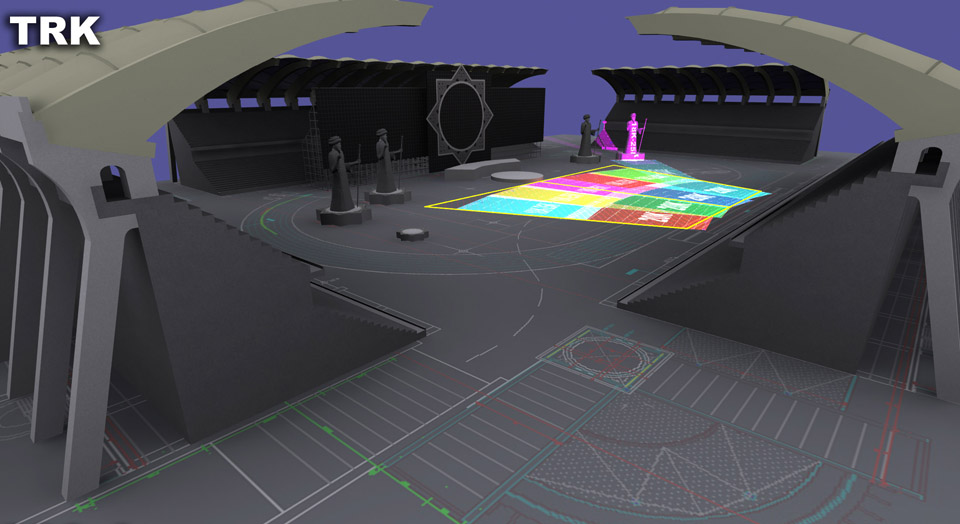 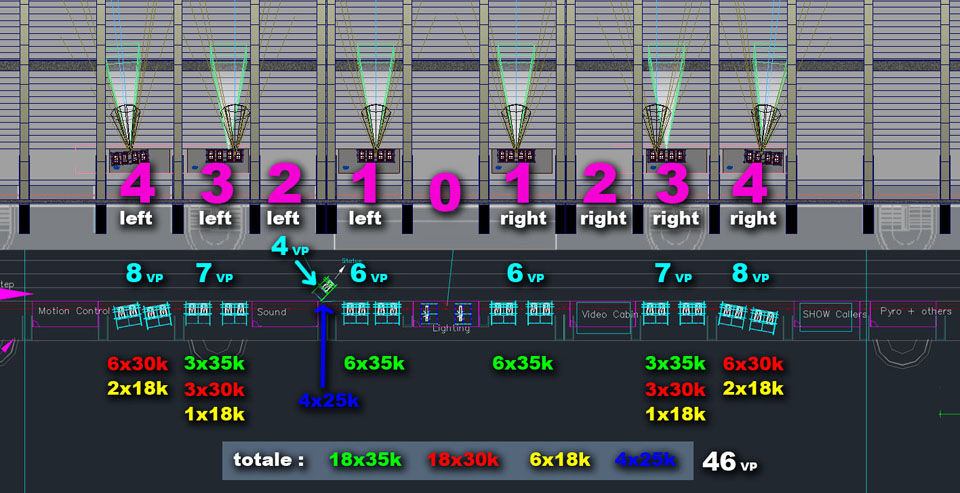 Above you have a top view of the installation on the top of the gradins south.

Below some 3d images of the stack of 4 projectors grouped into one impact.

Each stak is composed by 3 Christies 35k and one Christies 20k. The total weight of a single stack is more than 400 kilograms, and the inclination  is  a lot !

That's why I had to calculate the gravity point of each stack to give feedback on how to buit the structures.

With real weight problems of the machinery, it is necessary to weld the roof elements that support the stacks of video projectors in each scaffold, while calculating the gravity point (which must remain in the center of the scaffolding) and the inclination that the projectors must have during the show so that everything goes well. 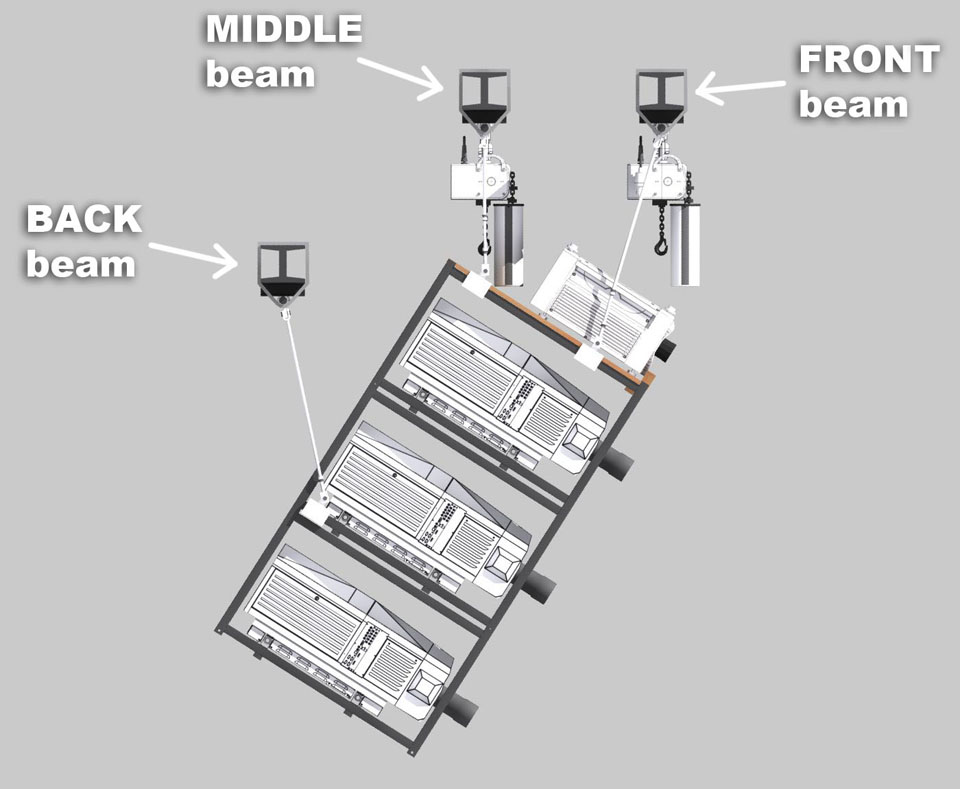 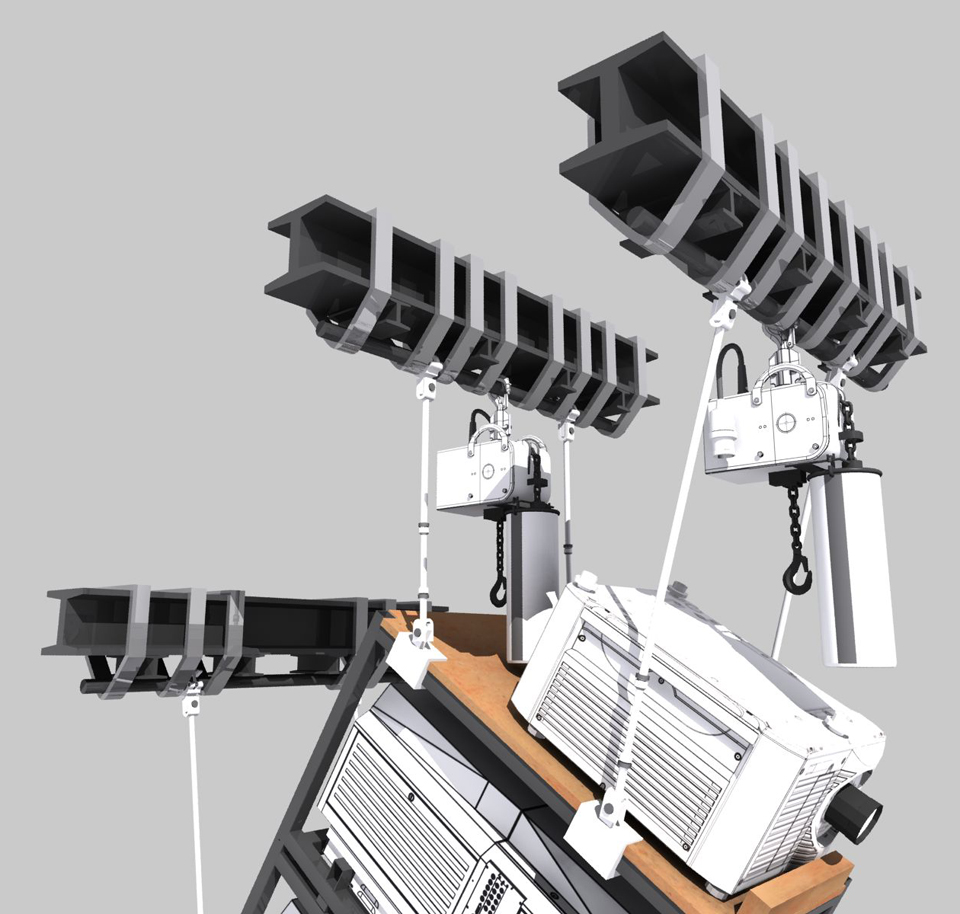 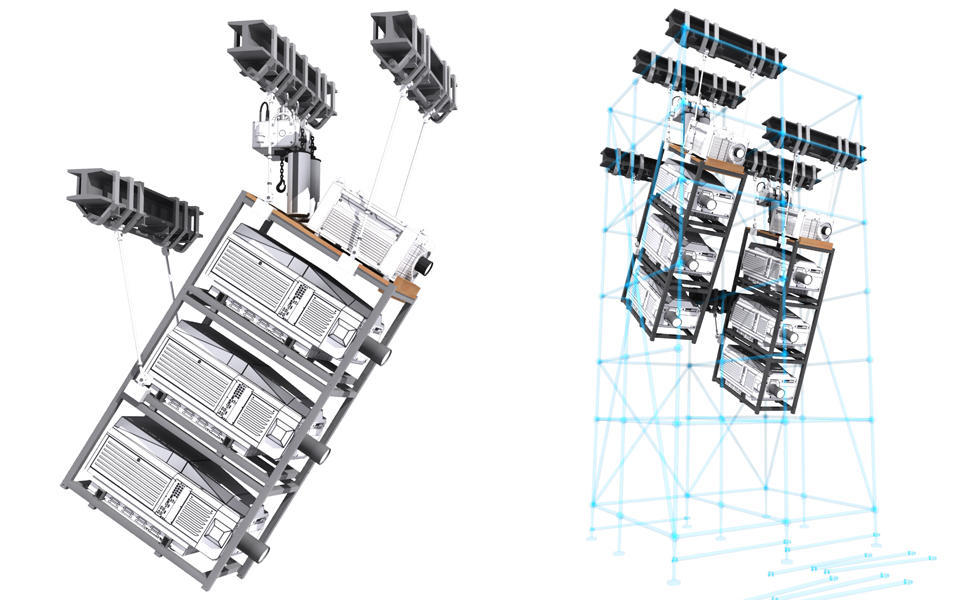 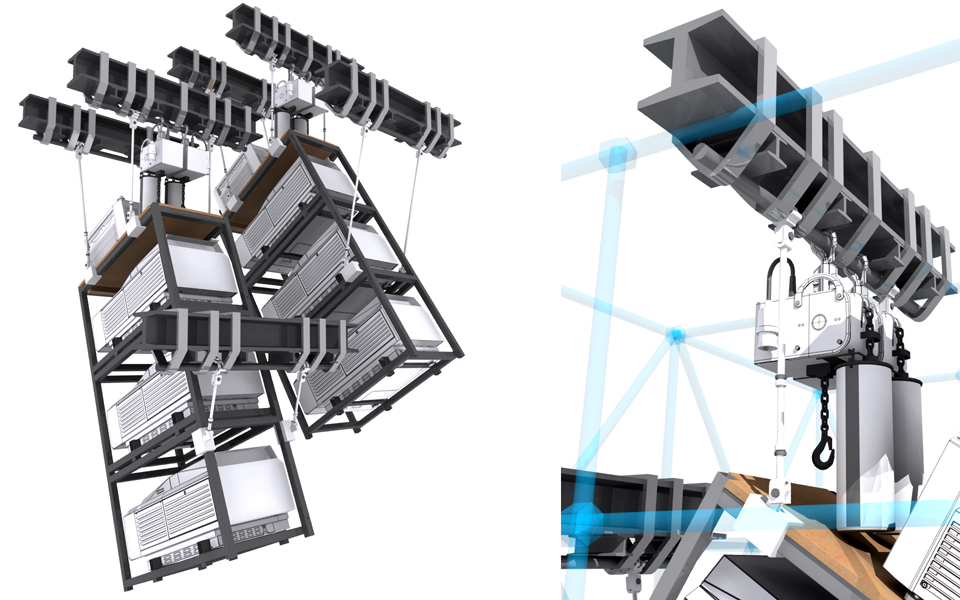 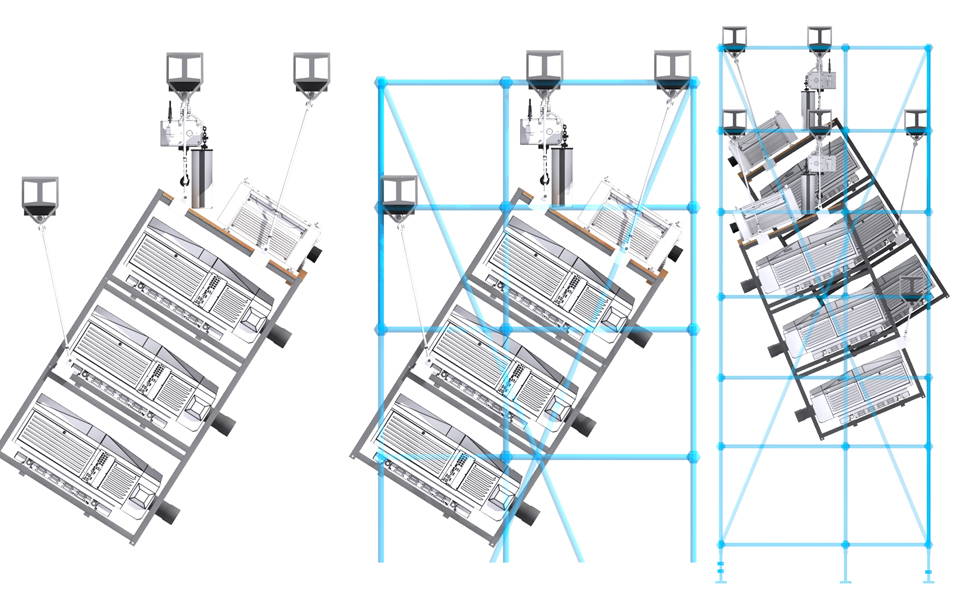 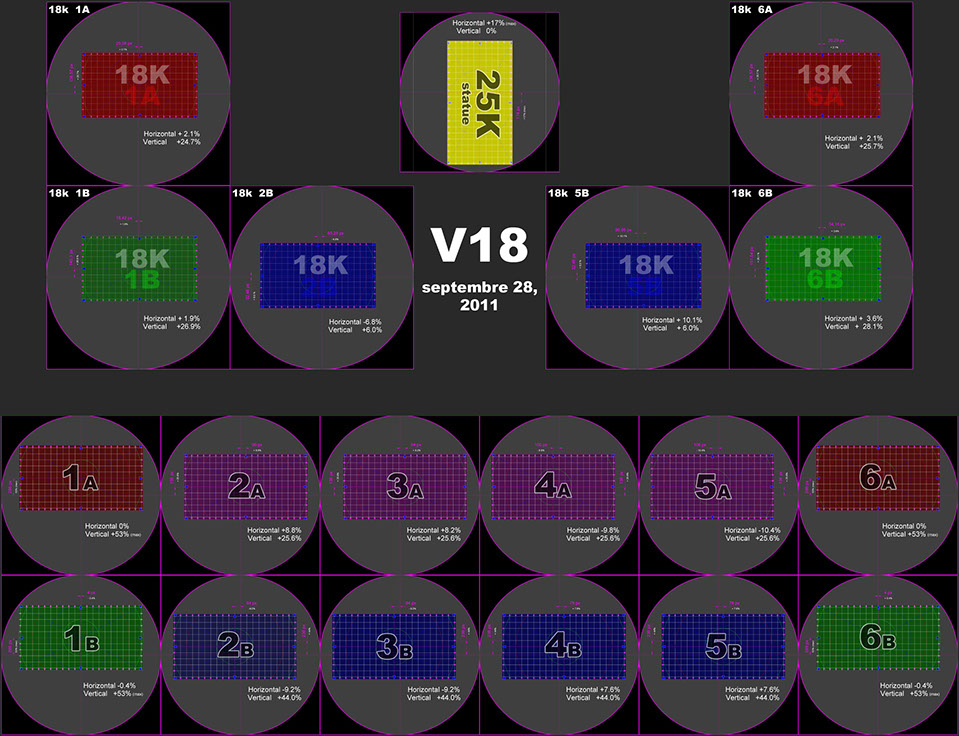 Above you have each single projector point of view to show the lens shift value and vertical/horizontal inclination.

Below you have the raster image (or texture) of the FOP (field of play) that I built to help both content creation and the physical installation once on site. I put a metric grid and as you can see the projection area is more than one hundred meters wide ! I also put stacks numbers in anamorphosis, just make the texture more funny. All those numbers appears perfectly verticals when they are see from an unique point of view, at the video projection floor, right in the middle.

You can click the texture below to open the full frame version. 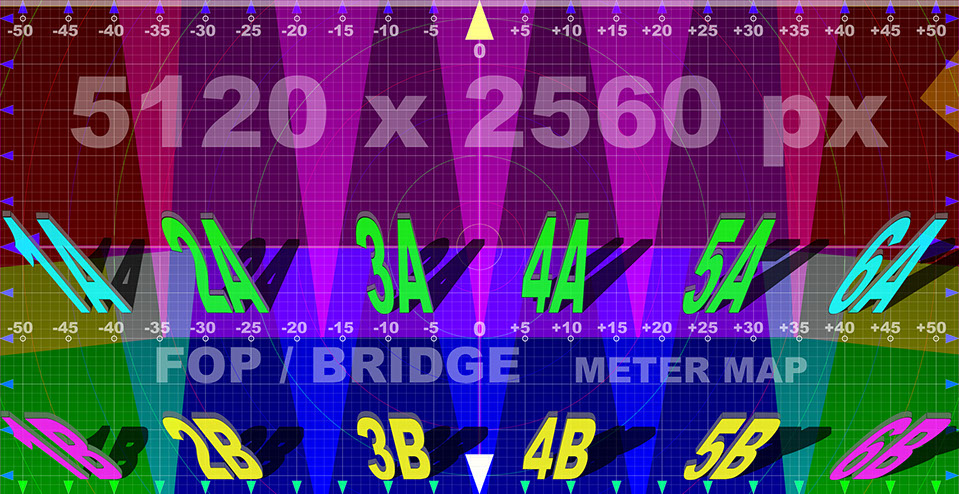 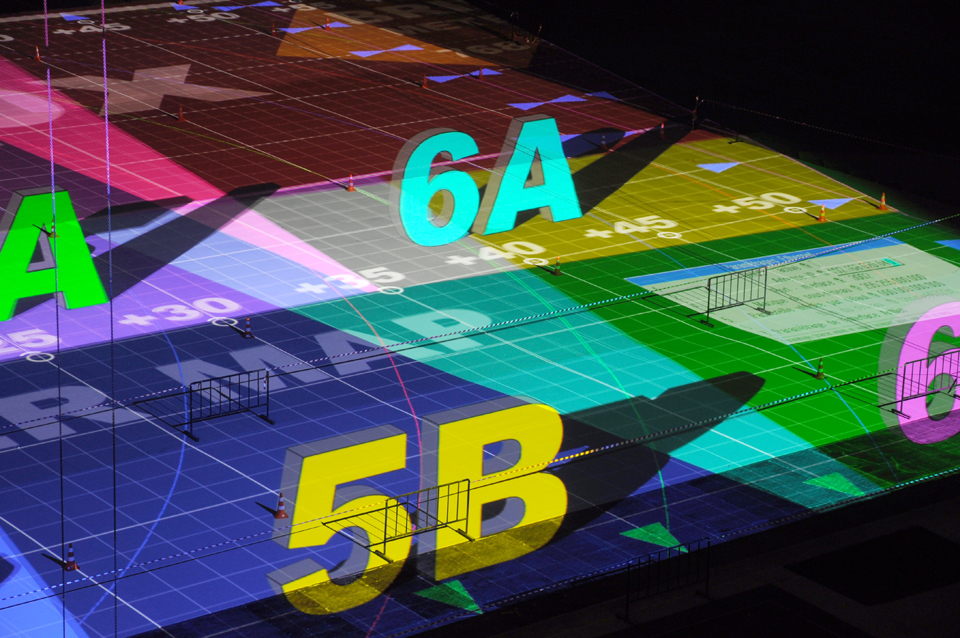 Above and below you have two photos of the projected texture during the installation. Those photos have been taken from the anamorphosis point of view in the stadium so that the numbers seems really to be vertical and give the illusion that the physically exists ! 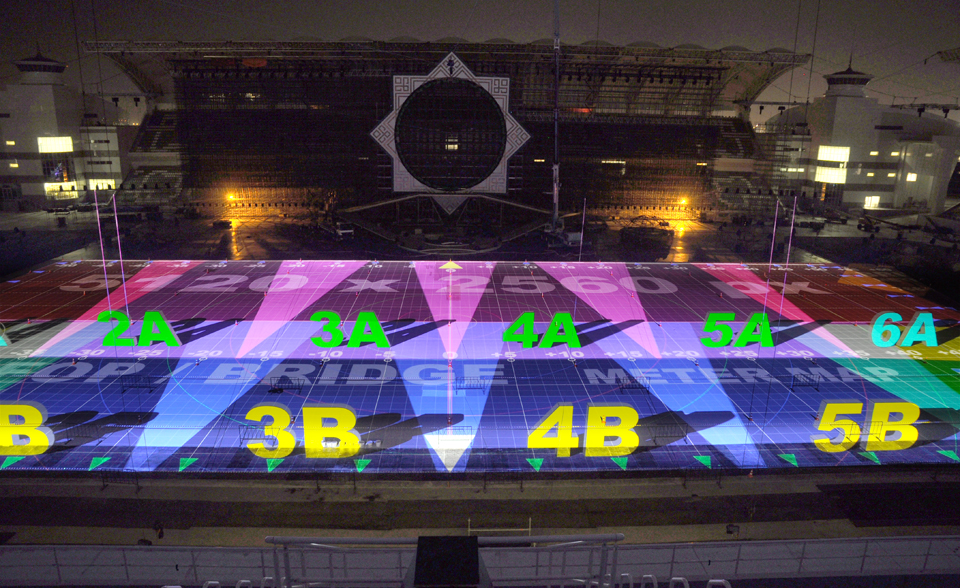 Hopefully everything has gone well with the installation and I had some times to play with this huge screen served by 52 projectors !

So I decided to create an anamorphic  image  of three red trucks that are parked on the field of play of the stadium.

I put all the video projectors that are used for the show, just on the ground, near the bigger truck.

On the right you have the flat image that I gave to the media server.

Below you have a photo of the result : the image only works from a specific point of view in the stadium. 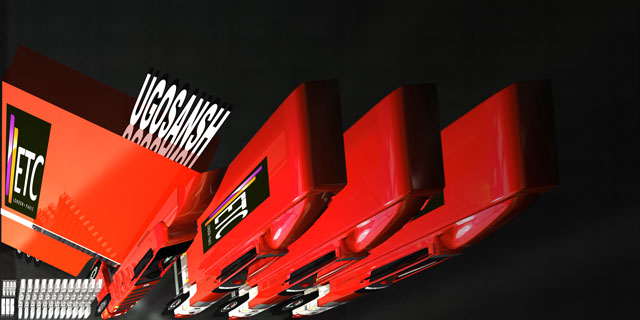 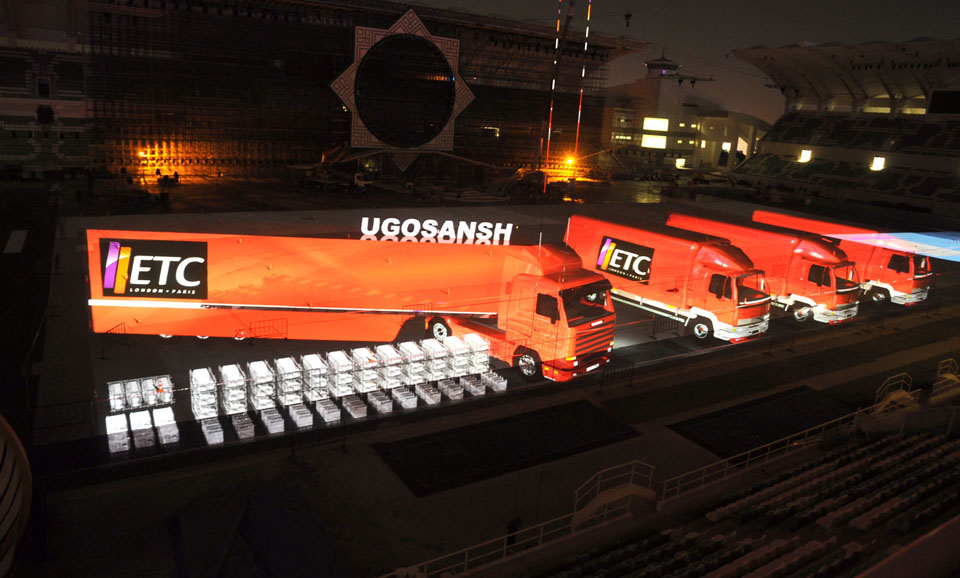